We will be based in Jerez for four nights and on our return to Moraira we will spend one night in a hotel in Granada giving an opportunity of visiting that famous city. Whilst in Jerez we will have excursions to Cadiz, Seville, Ronda and the possibility of visiting a natural Wetland area. The highlight of this trip will be the Horse Fair in Jerez. We will time our stay in Jerez to coincide with the opening ceremony and usually at about midnight there is a spectacular Firework display (does not always happen).

In the fairground itself there is a fantastic light display that is seen nowhere else in Spain and there are side shows of all description, including bodegas etc. Many of the local inhabitants of Jerez dress in national costume. There should be something at the fair for everyone. Also in Jerez itself there are many beautiful buildings, such as the Cathedral, Palace and Gardens to visit. 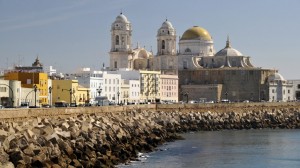 Excursion to Cadiz on Sunday 14th.  The Central Market itself is well worth a visit in the morning, especially the fish section. Cadiz is said to be the oldest city in Western Europe, as it was founded by Phoenician sailors about 3.000 years ago, as a commercial stronghold. Archaeological remains can be found all around the old town.

The Archaeological Museum (Plaza de Mina) exhibits are interesting, specially two Phoenician stone sarcophaguses. The remains of the Roman theatre just behind the Old Cathedral are also worth a visit.  We will return to Jerez for dinner and free time in the evening to visit the Fair.

Excursion to Ronda on Monday 15th.  After breakfast we will depart from Jerez travelling toward Ronda crossing the natural Park of Grazalema.  We will pass through white villages such as Arcos de la Frontera, Villamaritin and Algodonales arriving in Ronda where there will be free time for lunch

Ronda is the capital of the white villages.  Ronda is said to have the oldest Bullring in Spain, there is also Santa Maria church and the impressive bridges.  We will return to Jerez for dinner in the Hotel.

Day in Jerez on Tuesday 16th

After breakfast there will be free time but for those wishing to go to the Equestrian School there is normally a Show of horsemanship at 12 noon (entrance not included).

In the afternoon there will be an opportunity to visit one of the famous bodegas de Sherry.  You will have the opportunity of returning to the Fair Ground by Horse and Carriage, this proved very popular on our last visit to JerezFor those who would prefer to visit the National Park and Wetlands this can be organised, there may we an additional cost but this is not known at this stage. 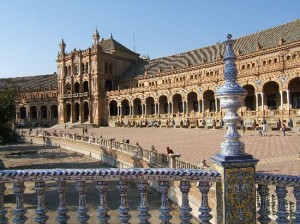 Visit to Seville on Wednesday 17th  This day promises to be a very full one, after breakfast we will get the bus to Seville where there will be  a bus tour of the most important monuments of the city, such as the Maria Luisa Park which includes the Plaza de España with its beautiful display of tiles representing the provinces of Spain.  The bus will continue along the banks of the River Guadalquivir (Spain’s only navigable river) we will pass the Torre del Oro constructed by the Almohades……. 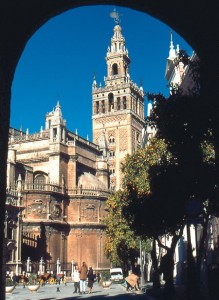 the famous Plaza de Toros de la Maestranza, the church of La Macarena and ending at the wonderful Murillo Gardens.  You can then continue on foot through the typical labyrinth of streets of the old Jewish quarter of Santa Cruz and finally to the area of the Cathedral (entrance not included). 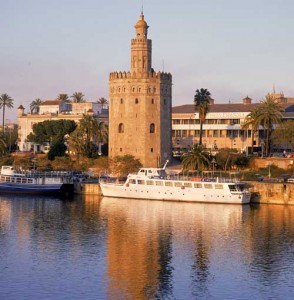 There will be free time to visit Los Reales Alcazares or take a boat trip on the River Gualquivir.  For those who have done the City Tour on a previous trip you will be able to leave the tour at any point to go off and do your own thing.  After the evening meal for those who wish to you will be able to stroll into the old part of Seville.

On our return to the Axilares Hotel in Granada we will have a Gala Dinner. On the left are photos of some of our members enjoying a similar evening on our last visit to Granada. A great night was had by all!!!!

After breakfast on the last day you will have free time in the morning to explore Granada. We will be leaving Granada at 1pm with a stop en route for half an hour. We would expect to arrive in Moraira at about 7pm.

To secure a place please pay a deposit of 60 euros per person at the Travel Desk at the next general meeting.

If you are unable to get to a General Meeting please contact Carol Mantle.