Our congratulations to The Creative Writing Group.

‘At the end of 2014 the Creative Writing Group were invited by the
Denia Writers Circle to take part in a short story competition, a
challenge which we readily accepted.  This eventually changed to a
competition open to all and sponsored by Jennifer Cunningham
Insurances S.L in conjunction with Bay Radio.  The stories would be on
a number of themes and our members were invited to submit up to three
stories each.  Several of our members did indeed submit stories and
when the total entries were whittled down to the final ten, five of
them were from our Group.  The winning three were then read out on Bay
Radio in ascending order on successive Sundays.  We were thrilled to
discover that  second place had gone to one of our members Richard
Singleton who wrote a very unusual story called ‘Dear Mum and Dad’
about computers and the future of the world, while the competition
winner was another of our members Hilary Coombes who wrote a stirring
and moving  story called ‘The Lion’. 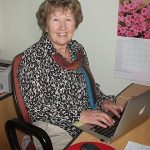 Our warmest congratulations to
both of them.  Indeed all the stories submitted by our group were
excellent and reflect the tremendous talent in our little group. “